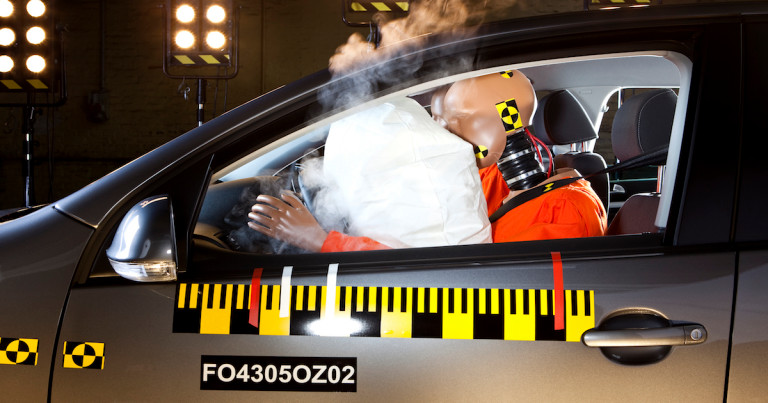 A new study supports previous research that women are far more likely to be injured or killed in motor vehicle accidents. While there have been many theories as to why this occurs, a new one is emerging that points to the size and weight of the crash test dummies used to simulate women.

The divide was first calculated in a 2011 study out of the University of Virginia, which found that for men and women who wore seatbelts, women were almost 50 percent more likely to be seriously injured or killed during a crash. That body of research pointed to seatbelts, citing that women who were injured were of “relatively short stature,” and “preferred seating posture and a combination of factors yielding lower safety protection from the standard restraint devices.” Basically, seatbelts weren’t made with women in mind.

The new study looked at 31,000 individuals between 1998 and 2015 and found that not only is previous research still holding up to crash data collected since then, crash test dummies used to test vehicle safety are also at fault — because these dummies are just five feet tall and weigh 110 pounds.

Vehicular crash test dummies don’t change weight distribution to represent how it is in real women.

“The odds of serious injury or death for female car-crash victims is 73 percent higher than for males,” City Lab says of the study. “Females continue to be in more vulnerable positions when involved in frontal impact collisions—even when they wear a seatbelt.”

In fact, female test dummies were not widely used until 2003 and since then, the height and weight of these dummies hasn’t changed to account for what an average women weighs, which impacts how car safety features are designed. According to the National Center for Health Statistics, an average American woman weighs 170.5 pounds and is almost four inches taller than the dummies being used.

“We obviously know a lot of ways that men and women are different bio-mechanically,” University of Virginia scientist Jason Forman said. “These differences [fat distribution, pelvis shape]… have the potential to change the ways that seatbelts interact with the body and with our underlying skeletal structures.”

Most crash test dummies are male and that’s having an impact on how safe women are in vehicles, according to new research obtained exclusively by CBC News. https://t.co/wPDYSpR5KF pic.twitter.com/F2QTbSvVFi

“There is some logic behind the use of those: it is necessary to evaluate and protect for the extreme ends of the population,” Forman continued. Which makes sense, but it’s clearly an inadequacy as well.

There was some good news coming out of this new research — both men and women are now more than half as likely to be seriously injured in cars manufactured after 2009 models, but the discrepancy for women still remains.

Even with this new information, it seems much more research needs to be done to determine how to bridge this gap. “If we leave things on the same course, we’re going to be in the same position with autonomous vehicles as we are with regular vehicles now,” Becky Mueller, a senior research engineer at the Insurance Institute for Highway Safety (IIHS) said. “We’re going to end up building autonomous vehicles with females have a 73 percent greater risk of injury, too.”

Please note that this is a quoted article and is intended for informational purposes only it may not necessarily represent opinions or views of Robes Law Group, PLLC.